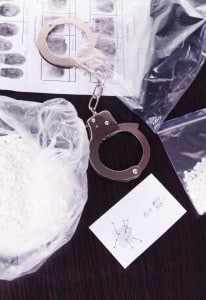 A criminal conspiracy is an agreement or understanding between two or more people who plan to commit a crime in the future and requires an overt act in furtherance of the agreement.  The overt act in furtherance of the conspiracy may be as simple as exchanging a telephone call or text message with another person.  A drug conspiracy typically covers some aspect of the manufacture, distribution, sale, or use of illegal drugs.  If you only participate in one small part of the conspiracy, you can be charged as a conspirator and found criminally liable for the acts of the other conspirators.  A drug conspiracy does not have to succeed to be illegal.  Keep in mind, state and federal drug laws are far-reaching and wide-ranging and cover a multitude of different agreements and conspirators.

Furthermore, under drug laws, numerous crimes qualify as drug crimes.  Agreeing to manufacture, transport, distribute, sell, or use any controlled substances (of which there are many: methamphetamine, marijuana, and heroin, just to name a few) constitute drug crimes.  The penalties for state and federal drug crimes depend on how much of a controlled substance authorities seize, and long sentences are not uncommon.  A rather modest amount of drugs can result in a long sentence.  Thus, authorities likely may arrest and charge a person with a drug offense even though he or she does knows little about the overall plan or conspiracy.

Scores of people can be charged as co-conspirators and face criminal trials.  Moreover, some co-conspirators may be informants or else cooperate with authorities to lessen their jail times or fines.

In addition, authorities will seize any and all property and assets used or planned to be used in the drug offense and conspiracy regardless of whether the owner is convicted of said crime or the conspiracy thereof.

But there are defenses available to you if you are charged with a drug conspiracy.

If you are arrested on a drug conspiracy charge under state or federal law, secure the assistance and counsel of a lawyer immediately.  Know this: You have rights and legal remedies. For more information, contact Nashville Attorney Perry A. Craft.