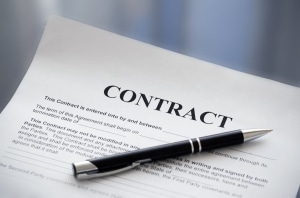 Quite often, after issues arise, individuals pointedly complain that the terms of a contract that they signed and entered are unfair and one-sided. After explaining how and why they trusted the business or individual who wrote the contract and asked or persuaded them to sign it, they believe that they should not be forced to live up to the contract’s terms and conditions. The reality is different: The other party now has the upper hand and is seeking money damages or other extraordinary relief all because a contract was signed. These individuals’ opinions and views about the unfairness are uttered sincerely.  Facing a costly and worrisome legal dispute, they may blame the lawyers, the courts, the law, or the system for their misfortune.

Though not unusual for contracts to be one-sided and unfair, a legal principle – freedom of contract – typically applies. Citizens and businesses alike can choose and are free to enter or not enter a contract. Generally, courts will enforce contracts as written. Since the parties to the contract voluntarily entered it, the courts uphold it. Remorse or regret that you entered a contract or failed to read or understand it before signing it usually is not a defense to a lawsuit to enforce a contract, and a court can make you live up to it. Similarly, the fact that a contract is one-sided, in and of itself, is no defense to a contract. While a contract may contain terms that are burdensome, that too is no defense. Lawyers are paid by the businesses to draft contracts, often form contracts, and lawyers representing the businesses write the contract to protect the business, not you.

Accordingly, these contracts may include terms that require you –

and more, much more.

Know this; There are defenses to a contract. These include fraud, lack of capacity (a minor or incompetent person cannot enter a binding contract), duress, coercion, unconscionability, failure of consideration, statute of limitations, purporting to require you to perform an illegal act (such as requiring you to buy illegal drugs), and more.

In addition, certain statutes or other legal principles may offer defenses or allow you to sue the person who forced you into the contract. For example, the Consumer Protection Act makes it unlawful for a seller to misrepresent or lie about important matters in forming a contract. Under the Uniform Commercial Code, if a warranty for a product fails for its essential purpose, the limitation on warranty is not enforceable and you may prevail. Or, if you buy or lease a new motor vehicle, truck, car or SUV, state lemon laws provide much and real relief.

The law of contracts is complicated and confusing. Lawyers study contracts, how they are formed, how they are enforced and what defenses may apply in a particular situation.

Beware. Use caution and good judgment.

This blog only provides general information. In a serious contractual dispute, talk to a lawyer first.

At the Law Office of Perry A. Craft, PLLC, our Nashville contract attorneys have more than 40 years of experience helping individuals and businesses. To discuss your business needs or litigation issues, call 615-953-3808 or complete our contact form to make an appointment.