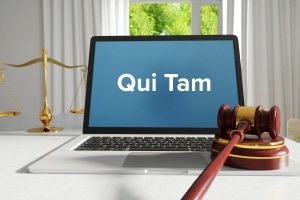 The False Claims Act (FCA) is a federal law that provides important protections for the federal government against different types of fraud. Individuals who defraud the government by issuing false claims are targeted by this law. These claims can include demands for money from the government.

Any person who knowingly issues a false claim, causes one to be issued, or issues a false statement or record pertaining to a false claim to the federal government, may be subject to civil penalties. The penalties for violating the FCA may include a maximum of $10,000 per claim and three times the damages received by the government.

Private FCA cases result from an individual coming to the authorities with information that is not public about the alleged fraudulent activity.

Under the FCA, private individuals are permitted to file lawsuits. This can be done under what is known as the “qui tam” provision. In a qui tam lawsuit, a private individual files a lawsuit against another person who is allegedly committing fraud against the government. The lawsuit is filed on behalf of the federal government. The individual who files the lawsuit is referred to as the “relator” in the case. In effect, this person is a whistleblower, someone revealing the alleged illegal conduct of his or her employer, another employee, or another party.

These lawsuits are filed in secrecy, under seal. Virtually no one is aware of the investigation involved or the lawsuit other than the federal government. When a private individual files one of these lawsuits, the Department of Justice has the opportunity to conduct its own investigation and determine if it should become a party to the lawsuit or not. If it does not, the whistleblower has the option of moving forward with the lawsuit or dropping it.

Types of fraud targeted by a qui tam lawsuit

Many FCA cases are filed as a result of alleged healthcare fraud. However, the FCA also covers false claims involving other government sectors and activities, including housing, military contracts, mortgage products, and financial aid, among others.

If you are the subject of a qui tam lawsuit or need legal guidance relative to your case, Attorney Perry A. Craft can help. He t understands how these lawsuits work and how to provide you with the most effective defense. To schedule a consultation, call the Law Office of Perry A. Craft, PLLC in Nashville at 615.953.3808 today or complete our contact form.