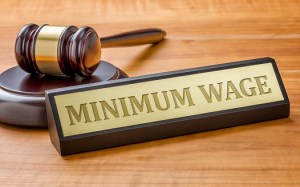 On February 23, 2016, the local Birmingham city government voted to increase the municipal minimum wage to ten dollars and ten cents per hour. On February 25, 2016, however, the Alabama state legislature enacted a law prohibiting city and county governments from increasing the minimum wage or from compelling employers to give employees leave benefits and the like, thus retroactively striking down the Birmingham minimum wage increase.  Since cities and towns are created by and are instrumentalities of states, they generally are subject to state supervision and authority.  Thus, state law usually controls and takes precedence over city and town ordinances.

Supporters of the state law assert that Alabama benefits from a statewide minimum wage. Low-wage employees have not seen a pay raise in years, and a minimum wage raise would allow them to purchase essential goods and services for their families and for themselves.  Proponents also argue that raising the minimum wage will stimulate the economy and help hardworking, low-wage citizens. Opponents assert that raising the minimum wage in Alabama would stymie Alabama’s economic and financial growth and point out that no Alabama-wide minimum wage exists.  Regardless, low-wage Birmingham workers, several of whom are African-Americans and work at fast-food restaurants, will see no increase in their paychecks and continue to receive paychecks based on seven dollars and 25 cents per hour.

Raising the minimum wage has become a national issue in the Democratic presidential campaign.  Hillary Clinton condemned the Alabama law and called it disturbing as the law makes it difficult for some working Alabamians who put in at least forty hours per week to provide for their families. Clinton believes that the national minimum wage should be increased to twelve dollars per hour, and Bernie Sanders espouses a fifteen dollar per hour increase.

The Indiana, Michigan, and Missouri state legislatures have passed legislation prohibiting local governments from raising the minimum wage, and Wisconsin enacted a law prohibiting local governments from instructing employers to offer paid sick days.  There seems to be a divide on the issue generally between Republicans (who oppose an increase) and Democrats (who support an increase).

If you are not being paid for overtime, not receiving the required minimum wage, or experiencing serious workplace problems – for example, discrimination or wrongful termination – you have rights and legal remedies. If you have questions about America’s minimum wage and related laws, talk to a lawyer. For more information and to have your questions answered, contact Nashville Attorney Perry A. Craft.