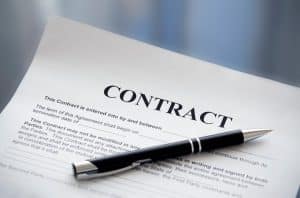 A contract is an agreement between two or more parties, whether an individual, a business, a government or non-profit. Contracts set forth the terms and conditions of a deal. Contracts are often written by one party and then signed by the other without considering the consequences of entering into it. Courts usually enforce contracts as written; If you agree to a contract, the courts will make the parties live up to it. However, the law provides certain defenses to a contract.

Fraud generally may arise when one party purposefully lies to or misleads the other party regarding an important part of the contract’s nature and subsequently injures the other party. Forceful persuasion means that one party involuntarily agrees to a contract, due to coercion, violence, or the like. But just because a person regrets that he or she entered into a contract, in and of itself, is not ordinarily sufficient to avoid it.

A contract of adhesion results from an unequal contractual footing between you and the plaintiff (the person or business who is suing you for breaking a contract) and terms so onerous that the courts will not enforce it, but this does not happen often. An illegal contract involves one party hiring another party to commit a crime, such as offering to sell marijuana or heroin.

Why you want a Nashville contract law attorney on your side

Perhaps you and the plaintiff have an oral, non-written contract, as opposed to a written contract; a non-written contract may be harder to enforce. Maybe you have a contract whose terms are inexact or non-specific. A defendant who is considered legally incompetent, due to age or disability, should also have an attorney who will protect his or her best interests.

If you have questions and/or concerns about contracts or defenses against contracts, talk to a lawyer. The Law Office of Perry A. Craft, PLLC provides competent counsel for individuals, businesses, and other entities seeking contract review, preparation, drafting, and litigation. Please call 615-953-3808 or fill out our contact form to schedule a consultation time with Nashville contract attorney Perry Craft.