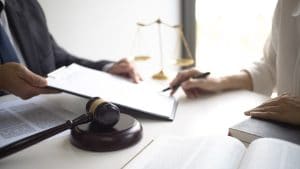 Contracts are legal agreements between two or more people or businesses. Each side agrees to do or refrain from doing an act. Thus, for example, one person agrees to pay money in return for being able to buy a car or food. Every business, from global corporations to sole proprietorships, relies upon contracts with customers, suppliers, partners, and even employees to do business. Contracts are written or agreed upon for sound reasons, like taking out a loan, or hiring a person to make a repair.

Numerous rules apply to contracts. Federal, state, or local law may affect your rights if someone breaches a contract. For example, if a landlord owns an apartment and a tenant fails to pay the lease, the landlord can seek to evict the tenant and demand payment for the balance of the lease. The lease sets the terms of the contract, but landlords must comply with Tennessee’s laws on evictions.

Generally, contracts for the sale of real property are in writing. As a rule, contracts in writing are easier to enforce than verbal agreements – especially if a dispute arises. There are different remedies if someone breaches your contract. The remedies are generally determined by the language in the contract.

If your contract is breached, generally the person or business that complied with the contract can seek financial damages which include:

There may be some remedies other than receiving money for a breach of contract. These remedies include:

The law of contracts and remedies is complex. This summary is general. If you need to enforce or defend a contract dispute, contact us. Usually, courts enforce contracts as written.