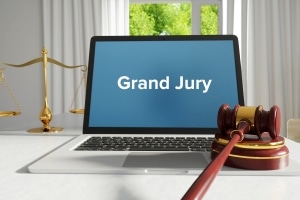 The grand jury decides whether criminal charges should be brought against a defendant. This procedure is in addition to the normal procedure of an arrest and a preliminary hearing. The grand jury process can last for several months, even though the grand jury may only meet for a few days out of each month.

How does the grand jury differ from the preliminary hearing?

The principle behind both a grand jury and a preliminary hearing is to determine whether there is enough evidence to hold a criminal trial.

Some of the key differences between the two court proceedings are:

Why are grand jury hearings held?

The Fifth Amendment to the US Constitution provides, in relevant part that “No person shall be held to answer for a capital, or otherwise infamous crime, unless on a presentment or indictment of a Grand Jury, except in cases arising in the land or naval forces, or in the Militia, when in actual service in time of War or public danger.”

What is the grand jury process?

In Tennessee, a grand jury is usually composed of 13 people. The process is one-sided. The prosecutor does not have to worry about objections by a defense lawyer or rulings by a judge. The prosecutor explains the relevant laws and then gives the grand jury members the evidence they need to decide if there’s probable cause that a crime has been committed by the accused.

The prosecutor presents witnesses who testify under oath. Some witnesses may seek their own lawyers. The rules of evidence used at trial do not necessarily apply. Prosecutors have much leeway.

Members of the grand jury are not permitted to discuss the case in public so that witnesses can speak without worrying about the consequences. In theory, the prohibition about speaking in public is designed to help protect defendants – when the grand jury decides not to indict a defendant – because the conversations are then kept secret.

An indictment by a grand jury does not mean you are guilty. You still have the right to present all your defenses such as seeking to exclude evidence illegally obtained, cross-examining witnesses, and holding the prosecution to its duty to prove the charges beyond a reasonable doubt.

At the Law Office of Perry A. Craft PLLC, our team of Nashville criminal defense lawyers fights aggressively for you, whether to seek dismissals of criminal charges, try your case to a jury and fight for acquittals or lesser charges, or negotiate just plea bargains. In some cases, alternate resolutions such as drug recovery courts may be an option. If you’ve been arrested or indicted on any criminal charge, call the Law Office of Perry A. Craft PLLC at 615-953-3808 or complete our contact form to make an appointment.