What Is the Difference Between Parole and Probation? 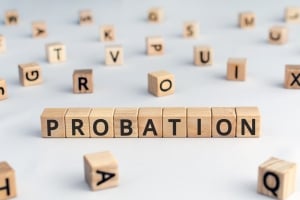 Parole and probation are both part of the criminal justice process. They are both terms that apply to defendants after they have been found guilty of a criminal offense. Defendants who seek probation or parole, or who have been charged with a violation of parole, can both benefit by having an experienced criminal defense lawyer on their side.

Probation is part of the sentencing process. It can be agreed to by the prosecution and defense counsel, with the consent of the trial judge. For example, the agreement may be that the defendant is found guilty of a crime, but instead of going to jail, he or she will be on probation for a year. Or, another example: a plea agreement may be that the defendant must serve six months in jail, and then be on probation six months after that.

Defendants who fail any of the following requirements may also be cited for violating probation, which can result in a return to jail to complete the length of the original sentence:

An important legal question to review with your counsel is whether you can get credit for the time you were on probation, should you be sentenced to return to jail because you violated probation.

Parole applies to incarcerated people who are let out of jail or prison earlier than their original sentence allowed, usually as a result of good behavior. Parole is supervised by the Tennessee Board of Probation and Parole. Inmates may seek a parole hearing (based on certain conditions, such as the length of time the inmate has been in jail) before a panel of hearing officers.

If the parole request is granted, the parolee is released under the supervision of a parole officer. Like probation, if a released prisoner fails to comply with any of the terms of probation, a hearing will be set to determine if the parolee violated the terms of parole. If there is a violation of parole, the parolee will normally be forced to return to prison to serve the balance of the original sentence.

We work to obtain acquittals or negotiate the best plea possible, including favoring probation over jail or prison time. We represent defendants at probation and parole violation hearings. We work aggressively for you both in and out of court. For help with all phases of a criminal case, call the Law Office of Perry A. Craft, PLLC at 615-953-3808 or complete our contact form to schedule an appointment.